After 6 months of planning our education expedition in Amboseli, it finally kicked off on 29th September. Airbus employees under the Humanitarian Challenge of Airbus Foundation and Miti Alliance joined us for planning and packing. Our journey started early on the 30th of September. Along the way at Emali we stopped to grab catapults as recommended by Michael Waiyaki of Miti Alliance, that would be used to for the distribution of seed balls from Seedballs Kenya. On that Same day we went to Amboseli primary school where we had a star safari with students and our team.

The next day, the 1st of October we visited Inkoisuk Primary School. On our way to the school we enjoyed firing seed balls with our catapults after a demo from Michael Waiyaki. At the school we divided ourselves three groups: Team Robotics, Team Planetarium and Team Airbus. All other teams continued well as planned but Team planetarium faced a number of challenges including lack of space to setup the planetarium, harsh weather conditions (hot sun and strong winds) and lack of reliable electricity. We adapted our workshop to hands-on astronomy demonstrations which included the exciting rocket launch. Michael Waiyaki distributed the seedballs to the students for them to throw while going home. He also showed them how a drone works and  took a photo of them with the drone. 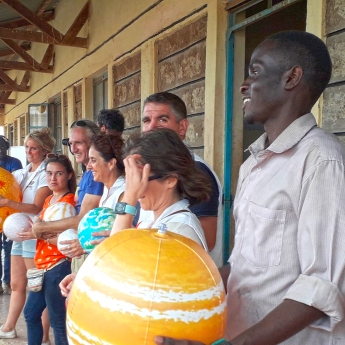 On the 2nd of October, the next school on the schedule was Ekaji Naibor Primary School. The journey to the school had challenges, the roads had been washed away rendering them impassable. We used an alternative route but our GPS guide was not accurate with the directions. We eventually found our way but had wasted a lot of time. When we arrived at the school at 12 pm, we found the students and teachers eagerly waiting for us at the assembly. We again divided ourselves into the three groups for the sessions. The school didn’t have a big enough hall, so the planetarium team projected Stellarium, a planetarium software on the wall. After all the sessions were done Michael distributed seedballs to the students and also showed them how the drone works and took a photo of them.

We visited Enkijape Primary school the following day on 3rd October. We arrived on time, met with the teachers and begun the three sessions. Unfortunately the School had a blackout and they had to bring a generator so that the children could learn. The Planetarium session had  to be projected in the hall. The Robotic session had to improvise by showing the students how to program by drawing on the chalkboard. At the end of the day we sang a song with the excited kids. As they left the hall we distributed the kids with the seed balls. Later that evening at the lodge we were staying we tried to have a planetarium show but we weren’t successful because there wasn’t enough power to support our electronics. 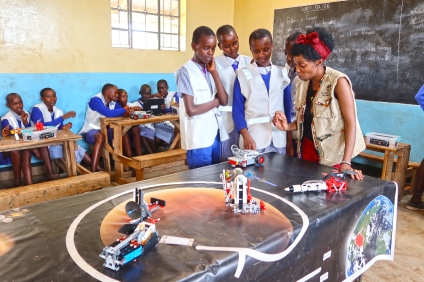 After a successful expedition, it was time for us to leave Amboseli but first we had to go for a game drive in Amboseli National Park. We managed to see three of the “big five”, the Elephant, Buffalo and Lion. We arrived in Nairobi at 5 pm and unpacked the truck. At the end of the day everybody was exhausted. The Airbus team were to travel on Saturday evening, so during the day we decided to visit Giraffe Center in Nairobi and later visited the maasai market at Galleria mall. After a long day we went back to Chu and Susan’s place where we had our last dinner and exchanged gifts before the Airbus team left for the airport. We took them to the Airport where we had an emotional goodbye.

We managed to reach approximately 2,800 students in 4 schools in the 4 days, thanks to Airbus Foundation and Airbus team for their support. Our local partners Miti Alliance, Wildlife Direct, all the teachers and students of Enkijape Primary School, Enkaji Naibor Primary School, Inkoisuk Primary School, Amboseli Primary school, the drivers and our dedicated TT team; Thank you, Asanteni sana, Merci Beaucoup! We have created a friendship beyond the 5 days and an impact we hope will last a long long time.

A daily selection of the best content published on WordPress, collected for you by humans who love to read.

The Art and Craft of Blogging

The latest news on WordPress.com and the WordPress community.